Eliza in Hayley's Memoirs… & in reality

Despite his best efforts – and I think he tried to be fair – you don't get much of a sense of Eliza as a person from William Hayley's Memoirs. Early on, he declares that


The warm language of poetry could hardly bestow too much praise on the heart and mind of the young Eliza; and the poet, who, in the character of her brother, had taken a pleasure in cultivating them with the purest fraternal regard, took still higher pleasure in praising them, when a series of utterly unexpected incidents had made the nominal sister, his wife.

Incidentally, this isn't the first time that he mentions his role in educating her.

Throughout, he calls her "his pitiable Eliza" and refers, again and again, to her mental health issues and his continued attempts to support her, even after they've separated. "The letters of Hayley", he writes (his Memoirs are in the third person):


to this very singular and highly meritorious mortal, afford a striking proof with what incessant tenderness and solicitude he endeavoured to counteract the infelicity of her constitution.

He also includes some comparatively anodyne extracts from her letters, some of which give a sniff of her archness, but none of her wit or sharpness. And, for some reason – unless I've missed the reference – he doesn't mention that she brought out two publications of her own.

The first was a translation of the Marchioness de Lambert's Essays on Friendship & Old Age, which came out in 1780 – the same year Mary Cockerell gave birth to Hayley's son, Thomas Alphonso.

Her introductory letter is followed by a poem. Both are addressed to William Melmoth who, in the introduction to his 1777 translation of Cicero's essay on friendship, had omitted to mention de Lambert "in speaking of the distinguished modern writers on Friendship", thus leading Eliza "though not intentionally, into those perils, that attend a novice in publication".

The poem is workmanlike, light-of-touch. In it, Eliza praises Melmoth's "soft Virgilian prose"…

Whose beauties will outlive
The ruder verse I vainly frame,
To lovely LAMBERT’S injured name
Full retribution give!

and concludes in a manner both internationalist and feminist …


And France exulting, ranks her name
With those who constitute the same
Of her Augustan Age.

Britain applauds so just a meed:
Let female worth, she cries, succeed,
Where’er that worth may shine!
Let France unenvy’d boast her share
Of glory from her letter’d Fair,
Since MONTAGU is mine! 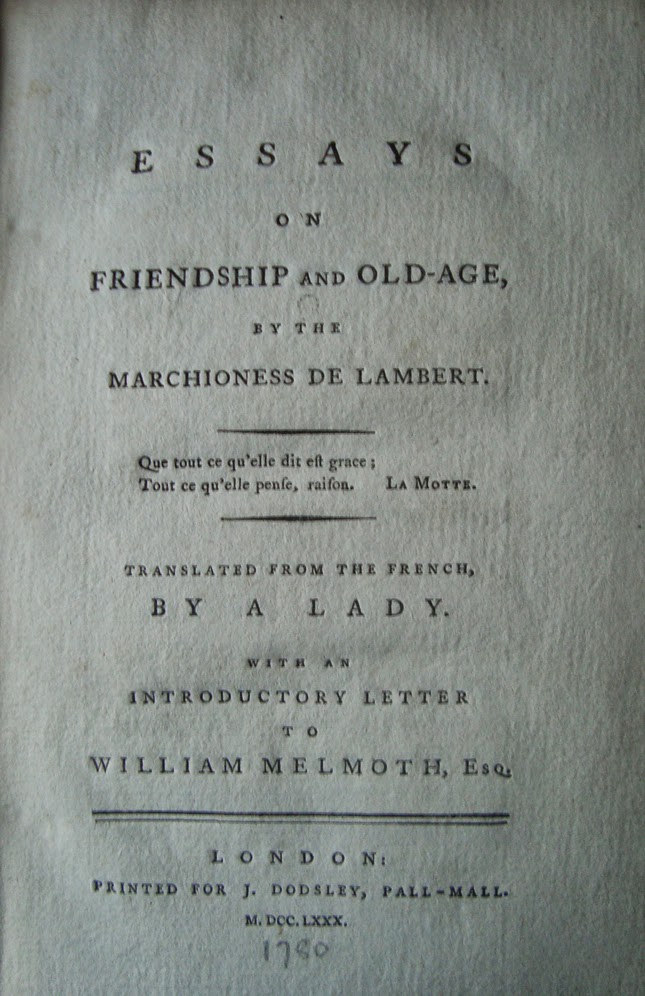 Eliza's second work, written in 1788, but not published until 1796 – the year before she died – and then, anonymously, is the  cynical and "anti-Ciceronian" The Triumph of Acquaintance over Friendship: An Essay for the Times.

It is dedicated to a Mrs. N. "I determined," Eliza writes in the dedication,


to try my long meditated attack upon Friendship; trusting that it would dissipate the cold spleen with which I was possessed. Once embarked in such an undertaking, I found it expedient not to turn my hostile thoughts towards you, lest they should bend from their purpose before their task was accomplished. 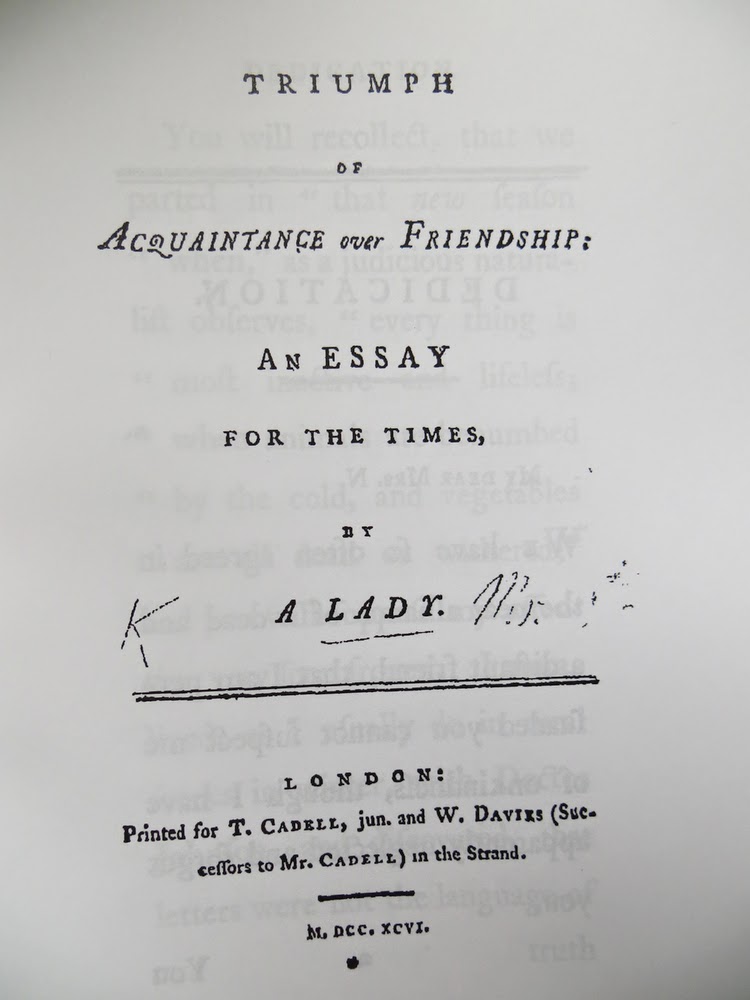 "I pretend not", she claims,


to reason as a logician, but merely to conjecture as a woman. Relying therefore on that extensive indulgence, which is so liberally allowed to the weakness of my sex, I shall endeavour in the following pages to draw a comparison of the two sentiments of Friendship and Acquaintance.

It's an intriguing work: Eliza's argument isn't always easy to follow, and her analogies – like this one, for instance


A friendly letter which fatigues can be thrown into the fire, but friendly companions who are embroiled are not so easily disentangled.

– don't always quite work: which of the embroiled friends here is represented by the letter, and which by the thrower? Or, could one be the thrower and the other the fire?

Anyway, that's all I'll say for now, but I'll return to The Triumph of Acquaintance over Friendship in a later post. There's a lot to unpick in there…
Posted by Lisa Gee at 00:00

Can also be spotted in Willesden swimming pool, driving up/down the M40 and/or M4 to and from (or in) Wantage and Corsham.

Circumstances have forced the Lisa Gee to adapt to hunting and gathering in Brent Cross Shopping Centre and Tesco.

A freelance writer, editor, comms consultant and video-maker and a part time PhD student at Bath Spa University, it tends to sleep well when/if given the chance.