I've finally got round to starting to map William Hayley's relationships. I realised fairly quickly that I'd drive myself nuts if I tried to do them all at the same time, so I've gone for three categories: family, friendships and work. So far I've had a bash at family and friendships

Naturally the different types of relationship overlap, so some people – including Hayley's first wife Eliza, his son Thomas Alphonso, and Tom's mother, Mary Cockerell appear in both.

Two issues troubled me during the mapping process: time and power/influence.

The only nod I've made to the former is by putting the descriptors of relationships with William Hayley's father and brother – both of whom died while he was very young – in the past tense and in pink. More on time in a bit…
I've signalled the different degrees of power and/or influence in the relationships by using
I've only deviated from this is in the (family) relationship between Eliza Hayley and Mary Cockerell. Although Mary was Eliza's servant, it was William Hayley who, ultimately, had control over both women: control he exerted on at least one occasion, post-separation, when Eliza challenged his authority. There were also times when Eliza depended on Mary for care and companionship and, even – in once instance (also after the couple had separated) when both women were lodging together in Derby – for sourcing food.

The only other fact I want to highlight at this stage, is that there are, unsurprisingly, more asymmetric power/influence relationships amongs family than there are amongst friends, and that the distribution is – even less surprisingly – gendered.

But, as I've already indicated, the two masses of text and squiggles below don't show how relationships evolve, wax and wane over time.

I need to do something more sophisticated and (almost certainly) animated to evoke these changes, to demonstrate the way marriages, deaths and fallings-out impact on friendships and family relationships: to highlight emnity as well as amity. I'm thinking here not only of William Blake's initial attraction to, and sympathy for Hayley crystallising into fury and frustration at the latter's attempts to direct his work, then, ultimately relaxing into gratitude at Hayley's successful efforts to ensure he was acquitted at his trial for sedition. I'm also wondering how to represent, say, the poet Anna Seward's disapproval and violent criticism of poet and novelist Charlotte Smith's work. Both women were close to Hayley at one time or another, with Hayley even negotiating on Smith's behalf with her publisher. Seward eventually, angered Hayley, by writing about Eliza in a way Hayley considered both unkind and – given her privileged knowledge of Eliza's mental health issues – a betrayal.

And I'm also thinking about how to represent the relationship between Hayley and Reverend John Johnson: Cowper's relation and carer. Although Hayley would have considered Johnson a "confidential" friend, a couple of comments in Johnson's letters to others, along with a few of his editorial markings on the manuscript

Finally, before I finish I'd like to critique the terms I've used to define the relationships. They are all possessive: hasWife; hasFriend; hasEmployer. I should have used isHusbandOf; isFriendOf; isEmployeeOf. But they are also too static for my liking. The next thing I need to understand is how to model flow.

Think I need to ask my friend who used to design software for nuclear reactors… Meanwhile, here's where I've got to so far… 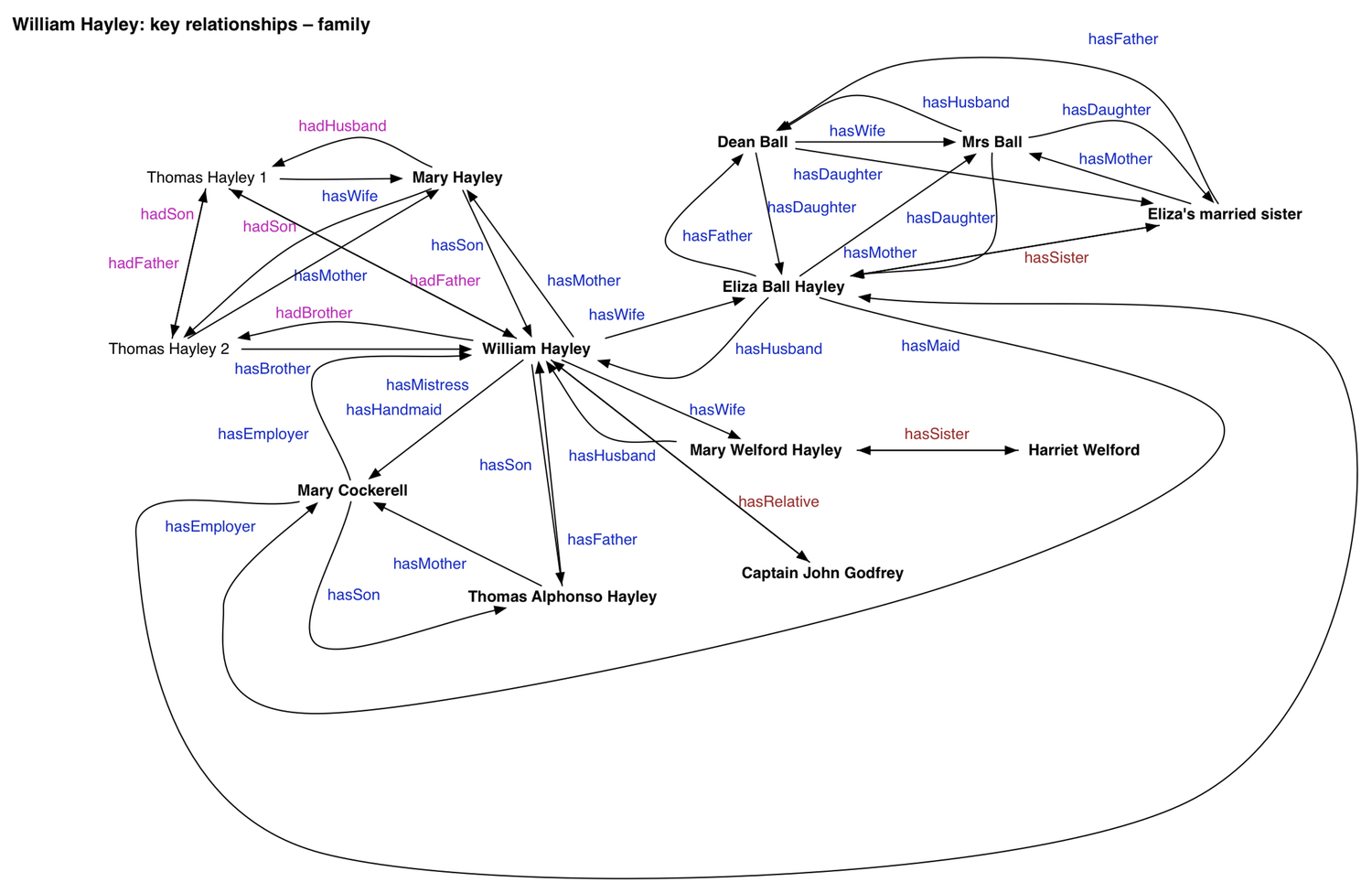 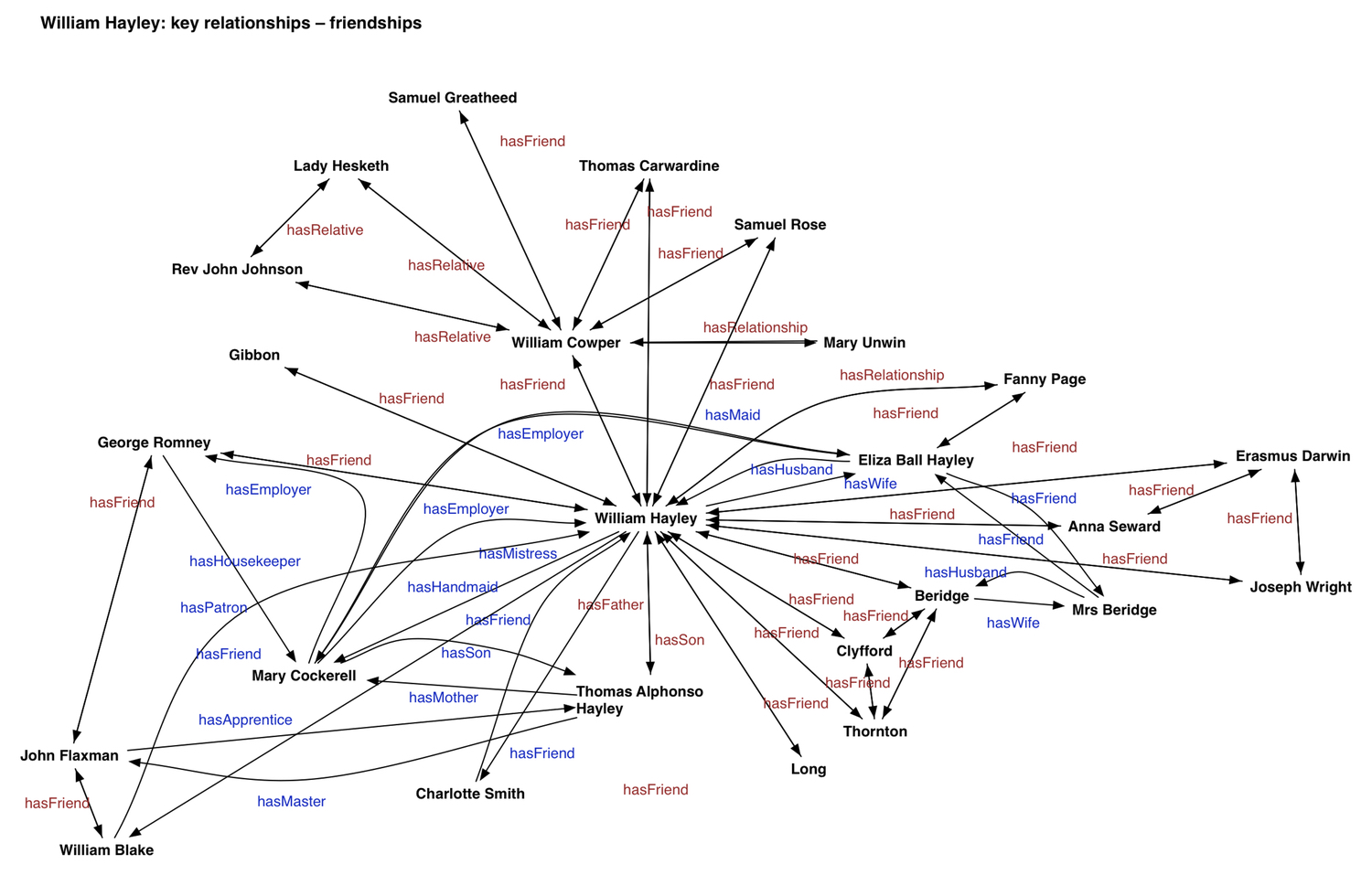 Can also be spotted in Willesden swimming pool, driving up/down the M40 and/or M4 to and from (or in) Wantage and Corsham.

Circumstances have forced the Lisa Gee to adapt to hunting and gathering in Brent Cross Shopping Centre and Tesco.

A freelance writer, editor, comms consultant and video-maker and a part time PhD student at Bath Spa University, it tends to sleep well when/if given the chance.